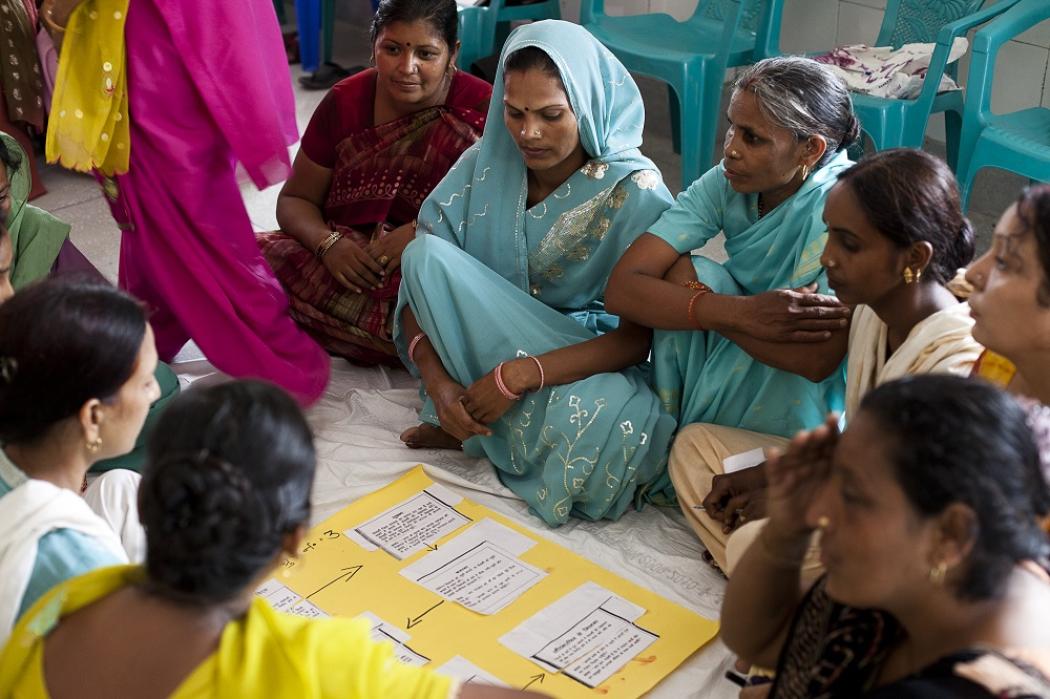 At a monthly Accredited Social Health Activist (ASHA) meeting at Sunhati Khadkhadi community health center, ASHAs conduct a group exercise and present their findings about handling newborn babies. ASHAs are effective at communicating and changing behaviors at the community level because they are from communities they serve. Photo by Trevor Snapp, IntraHealth International

When you think of a humanitarian, what image comes to mind? A foreign aid worker? A group of missionaries? Maybe a few American celebrities stirring trans-Atlantic compassion? (Just Google the term “humanitarian” and you’ll see a lot of Angelina Jolie, after all.)

Here’s another picture: local health workers, on the front lines of care in the communities where they grew up, providing humanitarian services every single day.

Humanitarians, by definition, actively engage in promoting human welfare and social reforms—both in emergency settings and for the long-term. While Western media often portray the image of expat aid workers flown in to save the day, only about 8% of humanitarian workers on the ground are international hires.

Despite these numbers, local workers often go unrecognized in their service on the front lines.

Millions of humanitarians across the globe are working to improve the human condition. They are community health assistants providing last-mile care to the most remote and vulnerable villages in Liberia. They are hair dressers imparting vital family planning knowledge to their clients in Guinea. They are drivers risking their personal safety to collect information on food security for Syrians under siege from their own government.

They are the indispensable connections between the aid budgets we debate in Washington and the realized mitigation of human suffering.

Today, on World Humanitarian Day, we must not forget that when the planes come in to evacuate foreigners from crisis settings, many local workers are left behind to continue the work, while continuing to face dangers on the ground.

Today, there are at least 28 ongoing conflicts worldwide. A record 130 million people depend on humanitarian assistance for their very survival. “Grouped together, these people in need would comprise the tenth most populous nation on Earth,” writes UN Secretary-General Ban Ki-moon. The need for humanitarian assistance is urgent.

In their laudable efforts to deliver this assistance, frontline humanitarians too often end up victims of violence themselves. Compared to the 74 attacks on aid workers in 2005, 2013 saw a peak of 265 attacks—a 250% increase.

On July 11 of this year, South Sudan witnessed one of the worst targeted attacks on aid workers in its three-year civil war. Earlier this month, the few remaining doctors in the besieged city of Aleppo pleaded for President Obama’s help in ending the five-year Syrian conflict, noting that an attack on a medical facility occurs every 17 hours.

Just this Monday, an airstrike on an MSF-supported hospital in Yemen killed at least 15 people, including 3 staff members. And the examples don't stop there.

The Aid Worker Security database found that last year 217 aid workers were victims of major attacks including bodily assaults, shootings, kidnappings and bombings. Ninety percent of these victims were local staff. While they may not make international headlines, these local humanitarians are the ones who often bear the brunt of risk in conflict settings.

As we move forward in the post-MDG era, let us better support the critical work that they perform. 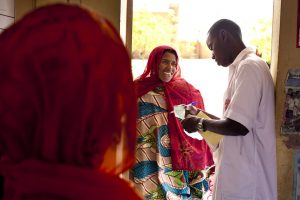 A pharmacist delivers drugs at a clinic in Mali. Photo by Trevor Snapp, IntraHealth International

Paying our Respects Through System Reform

At the global level, we must continue to fund a robust, coordinated humanitarian system while encouraging greater respect for humanitarian law. Investment in the health workforce is not only a cost-effective strategy to accomplish this, but also a moral imperative in crafting a better, healthier world.

To more adequately advance the humanitarian goals of saving lives and reducing suffering, we must restructure our aid mechanisms so that funding is channeled where it’s needed most—and often, that’s in the hands of local actors.

Already we’re seeing more examples of the international community embracing the idea of aid localization. Donors and aid agencies launched the “Grand Bargain” at the first-ever World Humanitarian Summit in Istanbul this May. Through this pact, 25% of humanitarian spending will be channeled to local organizations by 2020—a drastic increase from the 0.3% in 2015. USAID, for its part, has already committed to channeling 30% of its funding to local partners.

While progress unfolds on the global stage, everyone has a role to play in supporting frontline humanitarians at the grassroots level. Become a messenger of humanity and encourage leaders to maintain the commitments expressed at the World Humanitarian Summit. Write to your representatives and urge them to support legislation that empowers frontline humanitarian actors to more effectively deliver needed assistance—the Frontline Health Workers Resolution and the Reach Every Mother and Child Act, for instance, lay out plans for US leadership to strengthen global health commitments and workforce to achieve enormous returns on investment.

We cannot meet the needs of 130 million people without a reliable supply of frontline health workers who are present, ready, connected, and safe. So let’s expand our conception of what a humanitarian looks like, does, and needs, and get creative about ways to support the life-saving work they perform.