What Will It Take to Get Nurses the Respect and Recognition They Deserve? 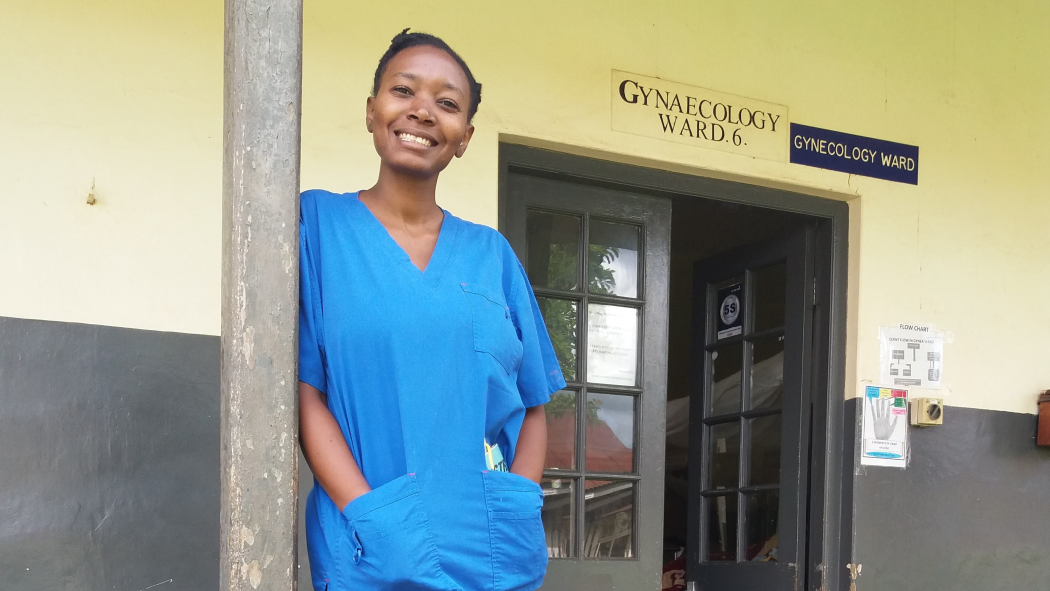 According to the International Council of Nurses, the global shortage of nurses could reach 13 million in the aftermath of the COVID-19 pandemic. And 90% of national nursing associations are concerned heavy workloads, insufficient resourcing, burnout, and stress related to pandemic response are leading nurses to leave the profession.

Lack of respect and recognition for nurses and other frontline health workers, including ignoring their voices, lies at the heart of many workforce-related challenges. This impedes progress toward ending the global COVID-19 pandemic and reaching universal health coverage.

We sat down with 26 experts, including nurses like Tracy Kobukindo, to identify effective strategies and solutions to change that. Tracy is a nurse and advocate in Uganda, and a Frontline Health Workers Coalition Regional Advisor. She shares how nurses in Uganda have organized to demand acknowledgment, respect, and recognition for their work.

Q: What are some of the challenges nurses in Uganda face when it comes to respect and recognition?

I think the main challenge is nurses—and their voices—have not been included in policymaking. For example, when COVID-19 hit, the government formed a response group called the National Task Force. But the majority of people in the Task Force making decisions about COVID-19 response were doctors. There were no nurses nominated, even though there are approximately 73,000 nurses in Uganda.

That demoralized nurses. We thought, isn’t our contribution enough for us to plan at the national level? Are we not clever enough?

Q: What interventions can raise nurses’ voices in policymaking?

What I’ve seen work is nurses organizing and ensuring we are included on leadership boards or committees that are making key decisions. At the beginning of the pandemic, I started a WhatsApp group called the Uganda Nurses and Midwives Hub with 143 nurses, and we were doing a lot of advocacy. We realized the National Task Force had been formed but nurses had not been appointed to it.

Around the same time, several nurse leaders were forming the Nurses and Midwives Think Tank, which was leading advocacy efforts. I got the chance to be part of that group. We made a lot of noise, honestly. We contacted the Ministry of Health, tweeted at the president, and wrote to newspapers that we needed to be at the decision-making table. Our slogan was, “If you don’t give us a seat at the table, we’ll carry our own chair.”

Now nurses are on many National Task Force subcommittees and we feel like our qualifications mean something and we are clever enough and capable. The Nurse and Midwives Think Tank also advocated for and fundraised for personal protective equipment (PPE). We worked with the Ministry of Health and saw the purchase and provision of PPE for nurses, midwives, and other frontline health workers become a priority.

And I like what the Frontline Health Workers Coalition has done to incorporate nurses’ voices in key fora and meetings, like at the Concordia Private Roundtable on Health Workers and Health Systems during the UN General Assembly last year. That was amazing. I spoke at that roundtable, and I was the only nurse among executive leaders—including from the World Health Organization, the World Bank, and USAID. I felt I had something valuable to bring. I also spoke at a Frontline Health Workers Coalition webinar during UNGA that had more than 500 registrants.

Q: How can interventions like these be scaled up to more nurses and other health workers?

We can share successful interventions through established coalitions, like the Frontline Health Workers Coalition and Community Health Impact Coalition. They are bringing together many organizations to advocate for frontline health workers, targeting policymakers at high levels while also reaching and engaging nurses and other health workers.

Also, global campaigns that are popularized and catchy, like the Nursing Now Challenge, can help increase respect and recognition. It’s worked in Uganda, Malawi, and other countries. 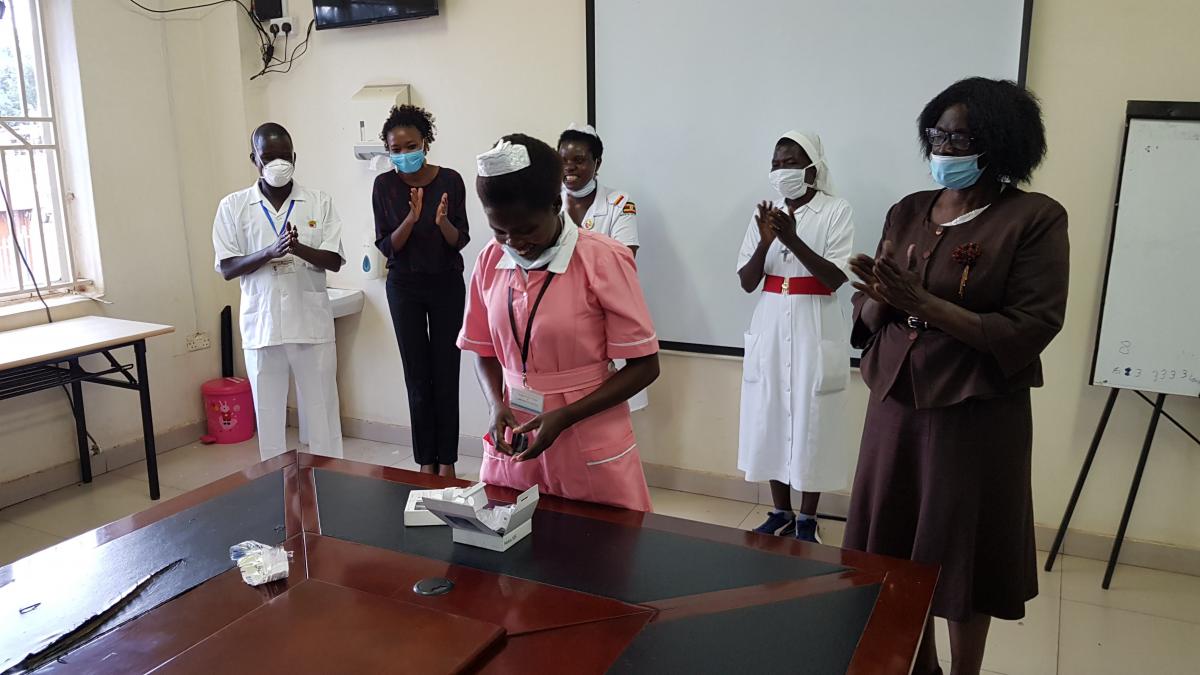 Tracy (second from left) at an International Nurses Day celebration in 2020 recognizing nurse Dorris Okundinia. Dorris wheeled a patient for 5km on rough terrain because she needed to get to the next-level health center for treatment. After waiting for an ambulance for hours, the patient’s wheelchair was the best option due to the transportation ban. The Nursing and Midwives Hub collected money and gifted Dorris a smart phone, and the Uganda Nurses and Midwives Union awarded her nurse of the year. Photo courtesy Tracy Kobukindo.

Q: What advice do you have for nurses and other health workers who want to advocate for greater respect and recognition?

As a young advocate, I thought we had to advocate against the government. With more experience I’ve learned effective advocacy is with the government. Because the government has the power to change things, and sometimes they want to, but they don’t know how.

So I recommend opening communication channels between leadership and cadres. Identify departments or groups within the government that have influence, then find a person with power who is approachable and talk to them, write to them, have a one-on-one or a small group meeting with them.

The Nurses and Midwives Think Tank had many discussions with leaders who were viewed as rigid and resistant to change. We met with them and got to see the human side of government officials. Some nurses did put the leaders on the spot and that was good because they went back and thought about it. Then we invited them to write messages for our nurses letter.

A key advocacy tool that came out of the Nurses and Midwives Think Tank was producing the first-ever nursing newsletter in Uganda. It was started because there wasn’t a regular, open communication to nurses from leadership, or a clear way to get messages to leaders. So we invited contributions, stories, and articles from nurses all over the country. Now, it’s a big deal.

The Nurses and Midwives Think Tank also organized writing workshops and we taught nurses writing skills. I led a session on how to tell your story and suggested health workers write opinion pieces and articles for the media or their own blog. We promote nurse blogs and post them on WhatsApp, Facebook, and Twitter, tagging the president of Uganda.

Finally, once you’re at the decision-making table, bring in others who have not sat at the table. I’m now seeing a lot of community health workers and village health teams speaking to leaders about what’s working and what’s not and giving their perspective. That can change people’s minds in leadership positions, it moves people.

This post was originally published on IntraHeatlh International's VITAL blog. The Strengthening Respect and Recognition for Health Workers: Strategies and Recommendations report was funded by the Johnson & Johnson Foundation. Thanks to Helen Cornman, an IntraHealth consultant, for conducting or co-conducting many of the interviews for the report.