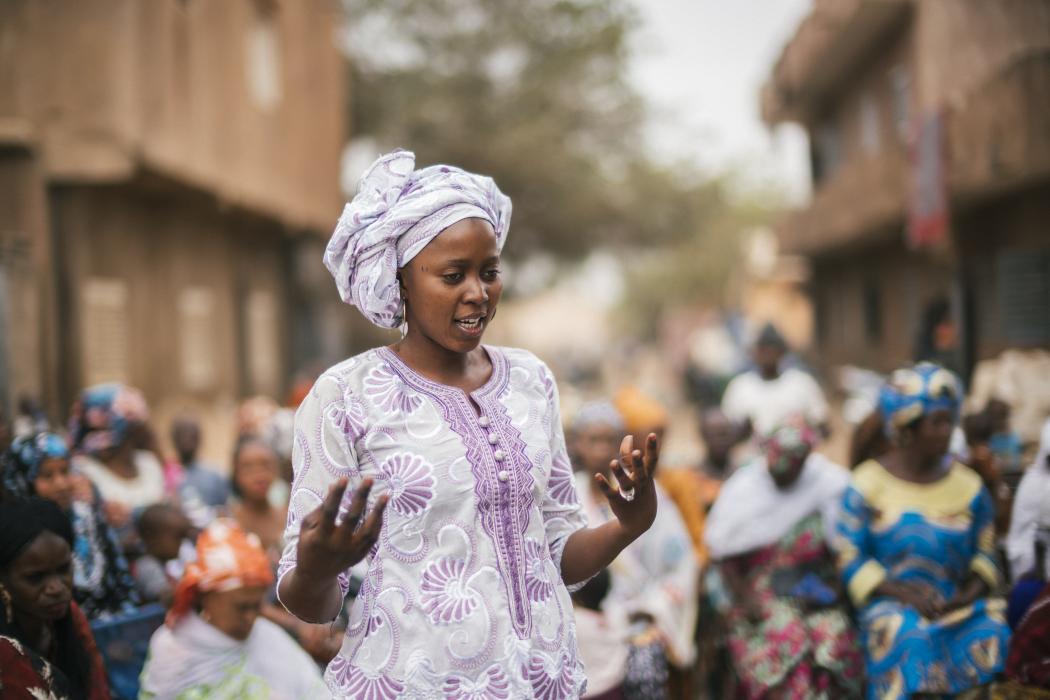 A member of the women&#039;s advocacy group Nieta in western Mali speaks out against early marriage, female genital mutilation, and obstetric fistula, and about the need for family planning in her country. Photo by Nana Kofi Acquah for IntraHealth International.

Imagine: It’s 1981. Ronald Reagan is president of the United States. Scientists still believe AIDS is a rare lung infection. And over 42% of the world’s population lives in extreme poverty.

Forty-two percent. That number always stops us in our tracks. It’s massive, and uncomfortably close to half.

Even more mind-blowing is how that number has plummeted in just a few decades. Today it stands at 10%. And we’re poised to reach 0% by 2030, if we achieve the Sustainable Development Goals (SDGs).

Two key factors behind all this progress—and in any success to come—are:

FP2020 reports that in a single year, access to contraceptives helped prevent 26 million unsafe abortions, 84 million unintended pregnancies, and the pregnancy-related deaths of 125,000 women. That’s one reason advocates like Ellen Starbird, the US Agency for International Development’s director of population and reproductive health, call family planning a critical link in achieving the SDGs.

Poverty rates are highest among children—particularly girls—and the bulk of the 10% of people still living in poverty are in Southern Asia and sub-Saharan Africa. These are regions that have huge populations of young people and are still struggling to improve maternal and child health, expand access to family planning, and keep girls in school. And as they struggle, new ideas and powerful voices are rising up, demanding change.

Francophone West Africa is a prime example. The region has become a rallying point for progress in health and development—in part because there’s so much progress to be made there. Many of these countries remain at the bottom of the human development index. But also because its countries, cities, and communities are coming together and inventing new ways to make contraceptives available to more of the people who need them.

The region is harnessing the power of advocacy from five different levels to do it, including:

Throughout West Africa, hundreds of youth ambassadors are serving as family planning advocates—talking with school kids and newlyweds, and making sure policy-makers take their needs and views into account.

The youth ambassador program has been around for over five years now, long enough for some of those ambassadors to enter the workforce and advocate at new, higher levels, like Innocent Ibrahim is doing in Niger. The former youth ambassador is now using what he learned during the program to help revolutionize sex education for middle- and high-school students, who’ve been demanding it ever since religious backlash caused the government to pull it from the curriculum.

Advocacy from the community.

Never underestimate the power of friends and neighbors to change their communities. In Kayes, Mali, for example, a group of 60 women and girls—spanning generations of mothers and daughters—are united in a cause: to help Mali’s women and children. Nieta, as the group is called, is working to end child marriage, eliminate female genital mutilation, and promote sex education and family planning.

They travel around Kayes and the surrounding region talking to groups, educating communities, and urging pregnant women to get prenatal care and deliver their babies in health facilities.

(And, you might be pleased to know, they’re suffering through the same awkward parent-teen conversations about sex that many of us have endured at one point or another—the conversations are a good thing.)

In the last 18 months, mayors and local officials from six cities in four countries have begun reproductive health initiatives using their own resources and the guidance and funding of the Challenge Initiative, or TCI (led by the Bill & Melinda Gates Institute for Population and Reproductive Health at the Johns Hopkins Bloomberg School of Public Health). The IntraHealth-led TCI Accelerator Hub in West Africa has led to a new cost-effective strategy of systematic referrals, which is helping participating cities respond to unmet need for family planning.

The Ouagadougou Partnership is a coalition of nine countries in francophone West Africa that’s working to give 2.2 million more people in the region access to family planning by 2020. Together they’re improving coordination among donors to optimize their support and boosting collaboration and cooperation at the national and regional levels. And they’re making progress, despite the region’s specific challenges—low contraceptive prevalence rates, sociocultural barriers, weak health systems and political commitment, and limited funding.

Advocacy from funders and global partnerships.

The Ouagadougou Partnership, FP2020, the Bill & Melinda Gates Foundation, the Frontline Health Workers Coalition—these are just some of the big players who are working to end poverty by expanding access to contraceptives and reproductive health services and bolstering the frontline health workers who can provide them.

And it’s working, all of it. The needle is moving. The investments West Africa and other regions are making now will yield a lifetime of returns.