Test on the Waters 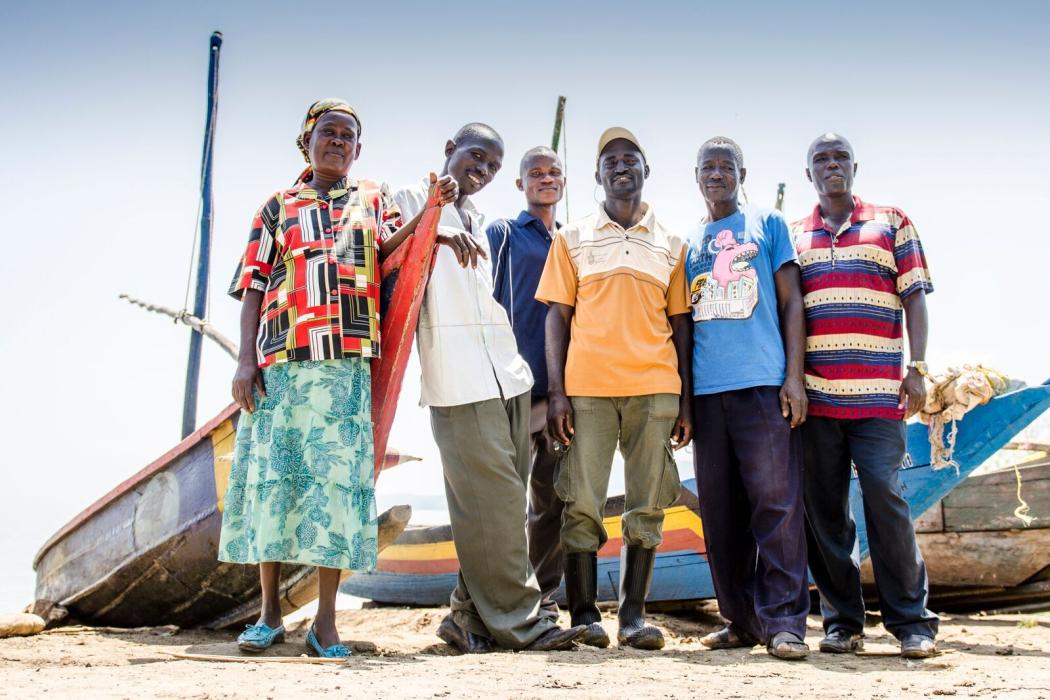 In the early morning, as the sun is just starting its westward journey over Lake Victoria, fishing canoes are already returning to shore. Although stocks of tilapia and Nile perch have declined in recent decades, Lake Victoria continues to support the largest inland fishing communities in Africa.

The fishermen of Lela Beach disembark and haul their catch over a sandy hill to a seaside market, where they sort it and sell it off to fishmongers and individual buyers. By midday, these same fish will be presented on plates across Homa Bay Town.

As the fishermen return to their boats, to clean them and make repairs, a young man in a white coat descends onto Lela beach. Rodgers Omolo is an HIV testing services (HTS) counselor and frontline health worker from Makongeni Health Center, which serves the fishing community through the support of EGPAF. The fishermen cheerfully greet Omolo, who is a regular visitor to the beach.

Fish sustain life in Homa Bay. But the fish trade has also brought death as a result of jaboya, the long tradition of exchanging fish for sex. Poverty is endemic and fishmonger are often women who often live in poverty and have several children to support. Sex, then, is a means of obtaining sustenance for their families and a commodity to sell.

The HIV rate along the lake, at 25%, is more than twice the national average, and fish-for-sex is considered one of the foremost factors—making fisherfolk a key population in the fight to end HIV and AIDS. According to Kenya’s 2009 Mode of Transmission report, key populations represent less than 2% of the general public, yet contribute a third of all new HIV infections. Beachside testing and counseling is a strategy for educating fisherfolk about HIV and for identifying those living with HIV.

Some fishermen are reluctant to be tested on the beach in full view of their colleagues. In such circumstances, the HTS counselors climb aboard a canoe and push off into the lake with their client. Today, Alfred Omondi Anyang’o, 35, the chairman of the beach, is among those being tested, and he is choosing to do it away from shore. As an oarsman paddles the canoe in circles, Omolo opens his black canvas bag and pulls out the items he needs for a rapid test: rubber gloves, a finger-prick tool, a lancet, and a reactive strip.

“So today I am going to test you for HIV,” says Omolo. “What is your name? Do you consent to this?” Anyang’o responds with his name and confirms that he wishes to be tested.

Omolo continues: “I want to know when you were tested last, and what was the result.” Anyang’o responds that he was tested two months ago and that the result was negative.

“In case of either result today, what will be your reaction?” Omolo asks.

“I will accept,” Anyang’o says.

“What we do today is confidential, but you should disclose your status to your [sexual] partners,” says Omolo. “Are you married? How many wives do you have?” Anyang’o says that he has just one wife and that she is his only sexual partner.

At this point, Omolo pricks Anyang’o’s finger and carefully places blood on the reactive strip. While they wait, Omolo demonstrates the proper use of the condom and encourages Alfred to use them. He reminds Alfred that a condom dispenser is located at the fish market, and that the HTS counselors make sure that it is always filled.

After ten minutes, the rapid test shows that Anyang’o is HIV-negative.

“What can you do to ensure that you remain negative?” asks Omolo.

“I will stick to my wife, and I will use condoms,” replies Anyang’o.

“I want to encourage you to maintain your negative [status] and use condoms correctly,” says Omolo, handing several packets to Anyang’o.

Counseling and testing completed, the oarsman gives a mighty push and the canoe turns back toward shore.