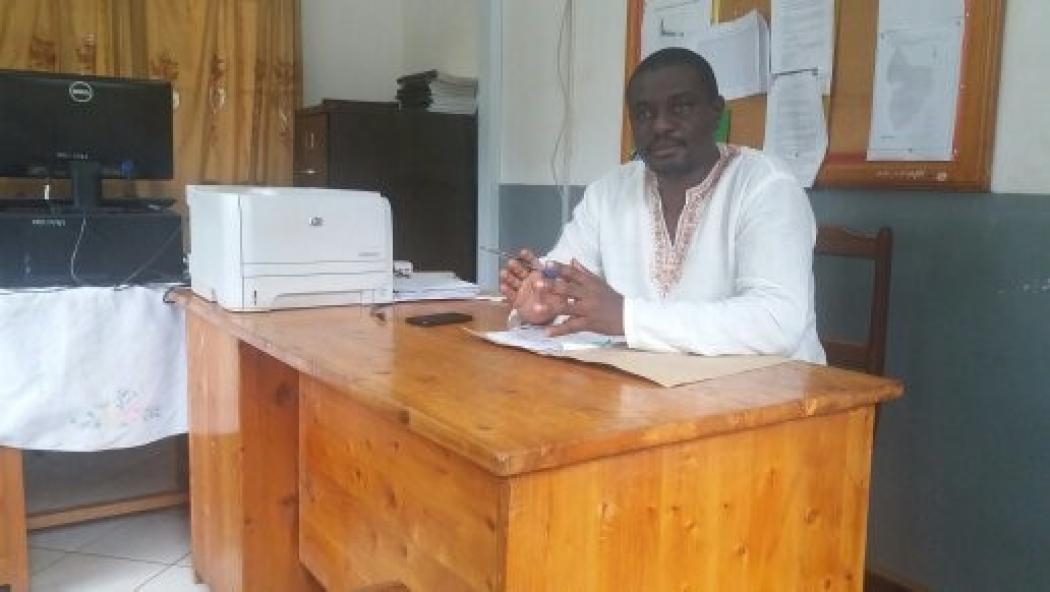 Thanks to Tanzania’s Task Sharing Policy, social welfare workers such as Pruden Furaha, a social welfare officer at Moshi City Council, are now officially able to identify key and vulnerable populations and help clients navigate the complex social and economic barriers that keep them from the care they need. Courtesy AIHA.

Aika is a 13-year-old girl from the northern Tanzania town of Moshi, at the foot of Africa’s highest peak, Mount Kilimanjaro. Aika contracted HIV as a baby through mother-to-child transmission. When her mother passed away a few years ago, Aika moved in with her grandparents in Mabogini village, a more rural part of the district.

Aika said she hasn’t been happy in her new home. She is constantly being chastised by other family members. Girls in the neighborhood no longer come to visit her or invite her to their homes, and she is worried that her friends at school will soon abandon her as well.

Over time, Aika says she started feeling more isolated. For a long time, she had been taking antiretroviral medicines to keep her viral load in check, but without a supportive home life, she stopped taking the pills and her health started to deteriorate due to near constant bouts of fever.

Like so many low- and middle-income countries around the world, Tanzania suffers from a critical shortage of trained and supported frontline health workers. This makes it difficult for people living with HIV or any chronic ailment to access the services they need.

The World Health Organization’s recommended doctor-patient ratio is one per every 300 people. Tanzania stands at one per 20,000. The gap is even wider in rural areas, such as Mabogini village where Aika lives. She – and thousands of others like her – often fall through the cracks of the country’s overburdened health system.

That’s why the Tanzanian government recently implemented a task sharing policy that expands the official scope of practice for social welfare workers related to HIV prevention, care, and treatment services. For Aika, this change has made a world of difference.

A volunteer community case worker who lives in Mabogini village heard about Aika’s situation and reported the case to Pruden Furaha, a social welfare officer at the Moshi Council Office. The pair visited Aika’s home, talking to her grandparents for nearly two hours before meeting with Aika. Thanks to Tanzania’s Task Sharing Policy, social welfare workers such as Pruden Furaha, a social welfare officer at Moshi City Council, are now officially able to identify key and vulnerable populations and help clients navigate the complex social and economic barriers that keep them from the care they need. Courtesy AIHA.

“We told Aika who we were and explained that it is our job is to help young people experiencing different social problems. We told her that we have helped other girls like her many times and that everything would be OK,” Mr. Furaha continued.

Their conversation reassured Aika, who soon began to open up about her family issues and personal health. She also talked about her progress at school, Mr. Furaha said. “By the end of the conversation, I could tell that Aika felt a little relieved, especially when we promised to return the following week,” he said.

After several home visits, Mr. Furaha and the case worker concluded that Aika’s living situation did not provide the safe, supportive environment she needed.

“We were able to identify a cousin who lives in the neighboring village and was willing to be a foster parent for Aika. She was both happy and hopeful about the change,” he said, noting that her health was slowly improved thanks to her return to her treatment regimen.

Data from the 2017 Tanzania HIV Impact Survey reveals that an estimated 1.4 million people aged 15-64 are living with HIV. Slightly more than half that number are aware of their HIV status, with approximately 660,000 people (47.8%) living with HIV but not yet knowing it. This poses a huge challenge as Tanzania works to achieve the global 90-90-90 targets.

Against this backdrop, social welfare workers such as Pruden Furaha have emerged as critical frontline caregivers working at the community level to provide a safety net for people living with or at risk of contracting HIV. They are helping to identify a broad range of people living with HIV – whether not yet diagnosed, lost to follow up, or in treatment – and provide them with much-needed services, including HIV counseling and testing, adherence support, psycho-social support, and further linkages to a community-based continuum of care. When fully utilized, this workforce could effectively support Tanzania’s health sector targets, including 90-90-90.

Since 2007, the AIHA has been working closely with Tanzania’s Ministry of Health, Community Development, Gender, Elderly and Children to ensure that community-level government social welfare workers, such as Social Welfare Assistants and Social Welfare Officers, along with volunteer case workers, are adequately equipped to provide high quality, needs-driven HIV/AIDS services.

Adopting a multi-pillar approach that focused on education, regulation, governance, advocacy, and practice, AIHA engaged experts from Jane Addams College of Social Work and the Midwest AIDS Training and Education Center at the University of Illinois-Chicago to strengthen the capacity of local partners at the ministry, the Institute of Social Work in Dar es Salaam, and other social work schools throughout the country. This approach has led to marked improvements, including better ward- and council-level coordination among service providers, implementing partners, facilities, and local governments in high HIV burden areas.

AIHA’s national-level work to strengthen Tanzania’s social work and nursing cadres — both critical to Tanzania’s task sharing strategy — is supported by the U.S. President’s Emergency Plan for AIDS Relief (PEPFAR) through the U.S. Center for Disease Control and Prevention (CDC), Tanzania. Both projects are implemented through AIHA’s HIV/AIDS Twinning Center Program, which is funded through a cooperative agreement with the U.S. Health Resources and Services Administration (HRSA).

You can learn more about AIHA’s social welfare workforce strengthening project in Tanzania by watching this short video.