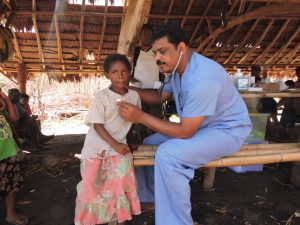 Dr. Santhosh Kumar was in the operating theater, a patient intubated on the table in front of him, when the earthquake hit. It rattled cupboards and shelves to the ground. People screamed and ran out of the building, but he and the anesthetist held their ground.

“All of a sudden the operating theater was empty,” Dr. Kumar said. “I had an intense urge to run. I looked up and saw my anesthetist standing there, holding the ambu-bag (manual ventilator) in his hand. Of course he had to stay—he was holding  a life on that bag. I was still holding the screw driver.” Dr. Kumar and the anesthetist finished the surgery, which was for a fracture thigh-bone, as a two-person team as aftershocks jolted the room around them. “We thought of running,” Dr. Kumar said. “We talked about it, but we don’t have a habit of going away from a surgery before we finish it. All through my career I was taught you don’t take your gloves off until you finish the surgery.”

Dr. Kumar was in Nepal as part of International Medical Corps’ emergency response team to the devastating 7.8-magnitude earthquake that devastated the country on April 25. Based in Thiruvananthapuram, a city in southern India, Dr. Kumar deployed to Kathmandu the same day the earthquake hit and was on the ground the very next day, working around the clock to establish International Medical Corps’ search-and-rescue and emergency medical teams in some of the hardest hit areas.

Hundreds of aftershocks followed the main earthquake—including one clocking 7.3 in magnitude. Dr. Kumar was in a Kathmandu hotel with other International Medical Corps colleagues when it hit. This time, he ran outside. “I called the anesthetist to see if he was OK, and he was with his family in an open area outside his house,” Dr. Kumar said. “The fact that we both did not run out of the operating theater is not a heroic act, but rather the product of years of practice to finish the surgeries you start.”

An orthopedic surgeon, Dr. Kumar has responded to conflicts and natural disasters the world over, from Nepal to Haiti, Nigeria, Somalia, and Syria. Dr. Kumar was first introduced to humanitarian work as a medical student in 1993 when he volunteered in the aftermath of an earthquake in Latur district in central India. “I became fascinated with disaster medicine,” he said. “I thought, ‘I would like to do this work if I become a doctor.’”

He first started working with International Medical Corps in 2011 at the height of the civil war in Libya. Over the next six months, he worked in field hospitals, caring for trauma injuries, from Benghazi to Misrata, Tripoli, and Sirte as the frontlines of the conflict moved, work that was made possible with support from the U.S. Agency for International Development’s Office of U.S. Foreign Disaster Assistance.

As he operated on people injured in the war, he trained field hospital staff in orthopedic surgery techniques. He was also part of the first emergency response team to reach Tripoli when the city was under siege. Dr. Kumar and the International Medical Corps team worked around-the-clock to reopen a hospital that had been shuttered by the conflict, restoring care to thousands of Libyans.

“Bullet injuries to the bones are totally different than other orthopedic injuries,” he said. “When a bullet hits a bone, it shatters it into a lot of pieces, which will be really inside the flesh. The bone can’t be reconstructed [from these pieces], so we have to take bones from other places to reconstruct it.”

Other deployments, like to remote corners of South Sudan in 2013, required Dr. Kumar to use old orthopedic surgery techniques because even basic instruments and equipment were not available. Following cyclones, like the ones that hit the Pacific island country of Vanuatu and Orissa, India, in 2013, most of the medical needs are not orthopedic, demanding Dr. Kumar to focus on delivering primary health care services to survivors, rather than providing surgery.

“In disasters, you need to be extremely flexible and open-minded,” Dr. Kumar said. “You might be an expert in a certain discipline, but survivors should be our primary objective. We need to improvise and mold our knowledge and skills to suit their priorities.”

When at home in Kerala, Dr. Kumar works as assistant professor in orthopedics and deputy superintendent of a 3,000-bed government medical college teaches at a university, a position that he hopes will help inspire the next generation of medical first responders. “Despite what people think, this work is not as dangerous as it sounds. I might be more likely to die in a road traffic accident at home than in a war or disaster—and the impact I can have far outweighs the risks I face in the field.”