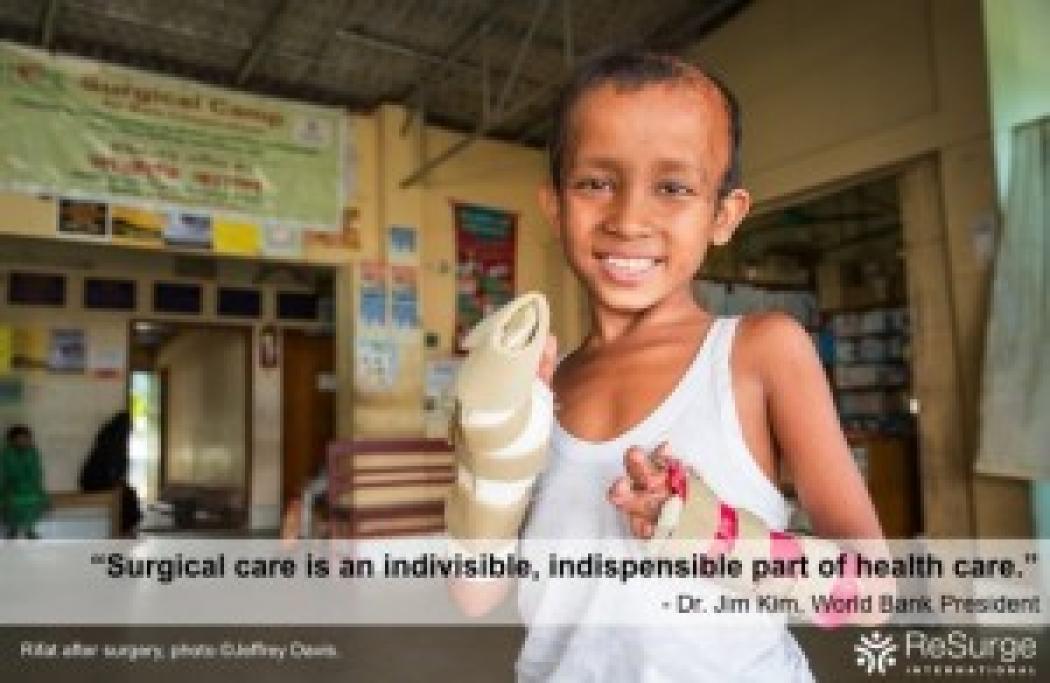 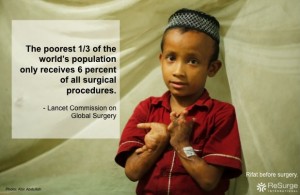 Rifat initially received very limited, inadequate treatment at a local hospital in rural Bangladesh. Consequently, disabling burn scar contractures needlessly formed, making his arms and hands mangled and almost unusable. If he had received even a modest appropriate surgical intervention earlier, he never would have developed such disabilities.

Rifat is one of nearly 5 billion people worldwide who do not have access to surgical care when they need it. Moreover, his case is an example of the need for more health workers at every level – from community health workers who could provide burn prevention training , to emergency nurses and physicians trained in treatment for acute burns, to district hospital surgeons who have the capacity to provide essential trauma services, and to more tertiary care hospital reconstructive surgeons to repair disabling injuries like Rifats and return functionality. 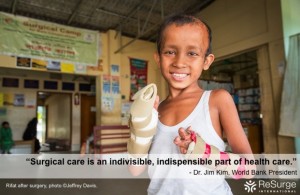 A year ago, Rifat finally received the care he needed when his father took him to see ReSurges year-round reconstructive surgical team in Bangladesh. After his first surgeries and a week of physical therapy, Rifat was already learning to grasp things and to use crayons. More surgical care will be needed in the future, but at least now he can feed himself and learn to write.

Surgical conditions – for trauma, obstetrics and non-communicable diseases – represent nearly 1/3 of the global burden of disease. Moreover, the lack of access to essential surgical care represents a public health challenge that disproportionately impacts the most marginalized individuals in society. The poorest 1/3 of the world’s population only receives 6% of all surgical procedures, according to the Lancet Commission on Global Surgery. This inequity results in millions of deaths and needless disabilities, like the ones Rifat suffered with for the first decade of his life.

Surgical care is a cross-cutting, cost-effective public health intervention to enhance health, productivity and economic development , and it is essential to health systems strengthening. In 2015, new evidence and advocacy asserting such have put global surgery on the public health agenda for the first time in history.

In March, the World Bank’s 2015 Disease Control Priorities Report (DCP3) stated that“surgical procedures are among the most cost-effective of all health interventions in the developing world.”In April, the Lancet Commission on Global Surgery reported that 5 billion people lacked access to surgical care and urged global leaders to invest in capacity. In May 2015, the World Health Assembly unanimously passed a resolution recognizing that surgical care and anesthesia are critical in achieving universal health coverage. As World Bank President Dr. Jim Kim said, “Surgical care is an indivisible, indispensible part of health care.”

These recent actions have contributed to a strong evidence base and a compelling argument for investing in surgical care as a cost-effective strategy for strengthening health systems, relieving human suffering and increasing economic productivity. Adding access to surgical care as part of public health and global development strategies represents a profound shift in addressing the burden of disease and heralds an era of transformational change in health. As 2015 comes to a close, we are grateful for this shift and the advocacy gains for surgical care this year. We know it is essential to ensuring the right of health and wellbeing for all people, like Rifat and billions more still in need of access to surgical care.

Footnote:  ReSurge and 60 organizations from around the world, including fellow Frontline Health Workers Coalition members Jhpiego and IntraHealth International, are part of the G4 Alliance (Global Alliance for Surgical, Obstetric, Trauma, and Anesthesia Care), a coalition advocating for the neglected surgical patient and building greater public health priority for surgical care as part of universal health coverage.