From the Frontlines to the UN General Assembly

"We all need to clock in before the entire health care profession clocks out," says Nurse and Advocate Amy Staley to global leaders at our Frontline Health Workers Coalition event during the United Nations General Assembly.

Nurse Amy Staley on the power of nursing, advocacy, and humanity.

As an Immunization Advocacy Champion, I have had the privilege of working alongside five other incredible nurses from other areas of the world. When each of us met, we were working towards health equity for our countries. After virtually spending time within the worlds of one another, however, we quickly realized that this initiative was no longer about us as individuals, but us as a group. We made a commitment to one another to continue to benefit and change all of our countries as one powerful force. Each of us continued to grow within our professional roles and as a meaningful tribe of our own.

Imagine what would happen if twenty-eight million nurses joined forces to drive change.

In May of 2022, I was elected as a Co-Chair for the Americas Regional Hub of the Nursing Now Challenge, Challengers Committee, a role that has provided me with even more opportunity to benefit nurses and communities throughout the Americas regions and beyond. Shortly thereafter, the Sabin Vaccine Institute and the Nursing Now Challenge invited me to speak at UNGA events alongside another incredible nurse, Rashid Mang’anda from Malawi.

When I entered the first room full of Presidents, CEO’s and world leaders, I was immediately drawn to the statistics. As a nurse, I work with numerical data every day. Numbers inform us of patients’ vital signs, health status, lab values, etc. Numerical data at the UNGA however, is different. Numerical data at the UNGA speaks volumes about humanity and exactly what we need to do to improve it across the globe. It was in this room where I learned that women contribute three trillion dollars to the health care workforce annually. It was also here where I learned that 25 million children missed out on life-saving vaccines last year. The statistic which struck me the hardest, however, was learning that only 14% of community health workers in Africa are paid.

Watch Nurse Amy Staley and other frontline health workers share their recommendations for policymakers at the United Nations General Assembly. Amy starts speaking at about 16 min, 6 seconds into the video.

The first panel I spoke on was sponsored by the Frontline Health Workers Coalition. I was asked about how the role of nurses has changed since the pandemic. I spoke about how the spread of misinformation has caused its own “Infodemic” throughout not only the United States but the world as well. More importantly, I shared what we had learned. The most important lesson being that it’s not supplies that make a hospital and it’s not ventilators that make up an ICU, it’s the nursing care. I talked about the amazing training that I had received from my fellow nurses at NYP/Weill Cornell on 8 South (Surgical Intensive Care Unit) and 8 North (Surgical Step-down Unit), our nurse-driven attitudes, resources we had received, and our leadership who remained present for us at all times.

I was also asked to share with the audience what I would tell United States President Biden if he were in the room at this moment. I knew that the entire audience was made of Presidents and CEOs of other nations and organizations and so I chose to speak to the room as a whole. I declared them to be nurses for our time spent together and gave them a crash course on what to do in an emergency situation or “Rapid Response.” I informed them that our countries are experiencing “Rapid Responses” of their own and called on them to bring nurses into conversations where decisions are taking place. I reminded them that both inside and outside of the hospital when you say the words, “We’re going to do everything we can” you must take that statement very seriously. All leaders present then vowed to clock in for nurses before the entire healthcare workforce clocks out. A United States Representative present for President Biden stated that they would be investing 1 billion dollars in primary healthcare to improve the healthcare workforce. Many other nonprofits and leaders also noted their personal and professional contributions to the nursing profession.

My speeches were referenced throughout the week by several presidents, leaders, and CEOs. 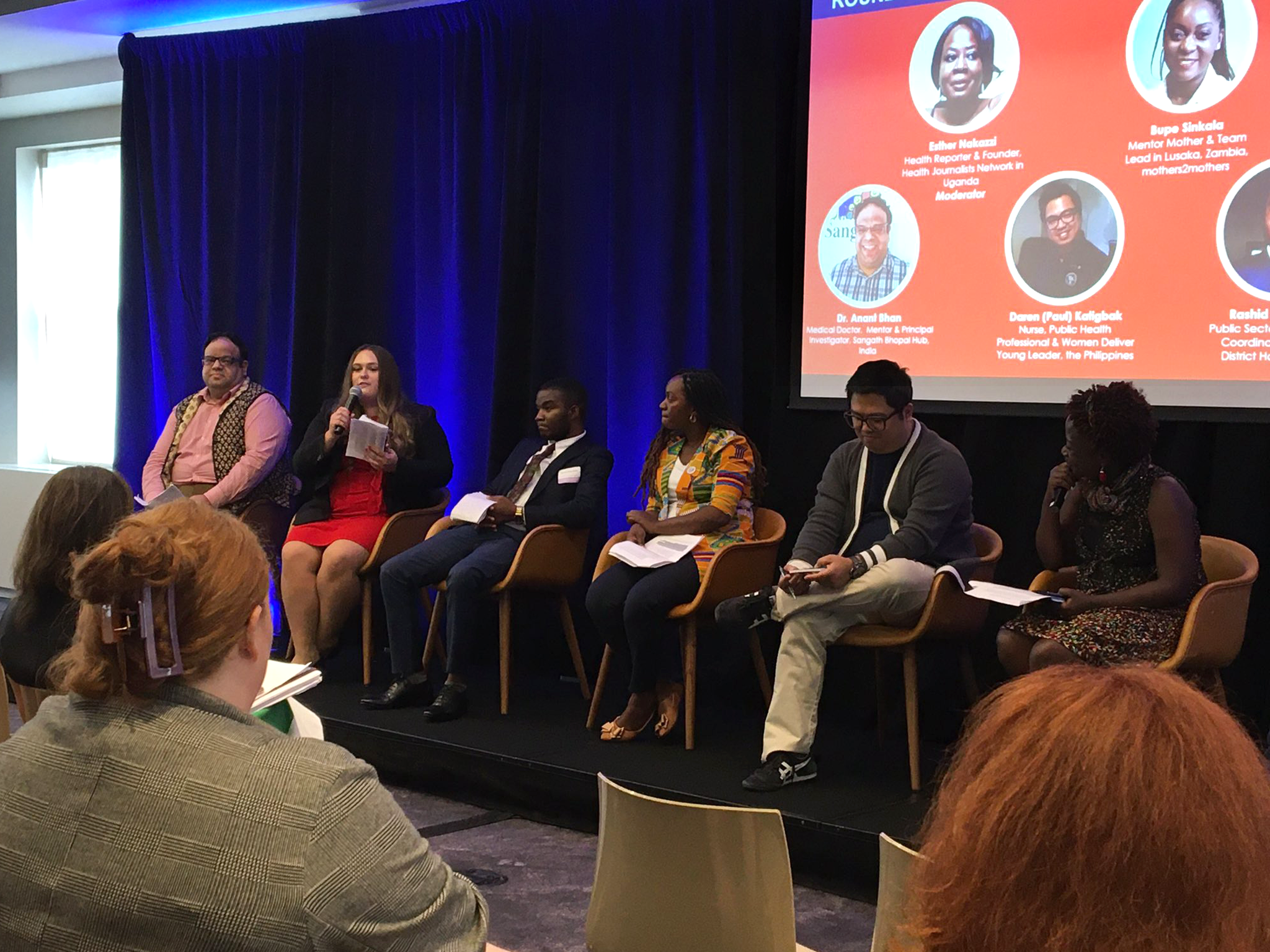 Amy Staley speaks on a panel with other frontline health during the Frontline Health Workers Coalition event. Photo by Nadia Peimbert of Sabine Vaccine Institute.

My second speech at the UNGA was unplanned at a DEVEX event. At this time, I kindly reminded leaders that in just a few days, I would be back in scrubs caring for my patients. I informed them that my patients would likely ask how they’re being represented in rooms such as the UNGA and UNGA sidelines. I also took this time to shift the focus in the room to my fellow healthcare workers in Africa to advocate for their compensation. The driving force behind my advocacy work is to advocate for all nurses, not only those who reside in the United States. Because of this, I needed to discuss the fact that in Africa, only 14% of community health workers are paid. Bringing this up as a Registered Nurse from the United States sparked a conversation. Why would a nurse from New York use her short time to speak about an issue in another country? Simply, because it matters.

My speeches were referenced several times throughout the remainder of the week by several presidents, leaders, and CEOs. Will my words change the law or the world? Maybe. Maybe not. They did, however, change viewpoints within the room. They changed the direction of conversations and sparked ideas in rooms where the power of change is realistic, possible, and attainable.

During United States President Biden’s UNGA address, he stated,” We’re not passive witnesses to history; we are the authors of history.” Nurses know that documentation is key. As nurses, we document our assessments, interventions, and numerical data not only because it is the law, but because we are proud of what we’ve done for our patients. As nurses on the frontlines and elected officials at the UNGA, all of our actions are currently being documented in future history books. Will we be proud of what’s published?

If there is one piece of advice that I would give others looking to get involved in advocacy work, it would be to simply begin. It doesn’t need to be at a grand assembly or meeting with CEOs, Presidents, and world leaders. Anyone can begin with a simple action, tweet, or promise. I began by joining the Nursing Now Challenge network, which in turn amplified my voice across over 150 countries and drove my presence at the 77th United Nations General Assembly events. Imagine what would happen if a profession of twenty-eight million nurses joined forces to drive change for humanity. I remain hopeful knowing that soon, we’ll find out.