A First Responder on the Frontlines of the Yemen Humanitarian Crisis 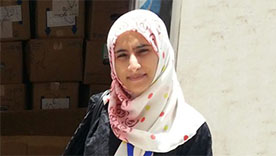 Doa’a is a health program officer in Yemen working for International Medical Corps.

Since last spring her reports have appeared on our website providing a rare view from inside a country at war where 80% of the population is in need of humanitarian assistance. The violence is so pervasive that few outside organizations remain in the country.

Doa’a’s blog posts  portray a nation whose people hover on the edge of catastrophe –where stocks of fuel, food, water and medical supplies are severely depleted, where over half Yemen’s 25 million people are in danger of not having enough to eat  and war is never far away.  Doa’a is 30 years old and lives and works in the southern port city of Aden. She’s married and has a baby boy. In her blog last May she described chaotic scenes as fighting came to her once calm neighborhood. Despite bombings and constant shooting, Doa’a remained calms and tried to provide assistance wherever and whenever she can. In one entry, she wrote, “If I see injured people within half a mile from my home, I run out to try to save them. I have also been to the Touwahi Medical Center on several occasions to do minor medical procedures. There are no surgeons there who can perform the kind of operation needed to repair major war wounds. So far I have been involved in 17 first aid interventions and minor surgeries to assist injured men who arrived at the medical center.”

On Wednesday, May 5, Doa’a and her family were forced to flee their home when the fighting surrounded them. After a harrowing escape, Doa’a and her family found refuge with relatives in another part of the city. She then continued her work with International Medical Corps, helping establish a new health clinic in the city to serve the thousands of displaced people. She wrote, “I did an assessment last week of the health services in the area and found out there were no medical centers. I called our program manager, who immediately responded. We rented a warehouse and established an International Medical Corps clinic. We are now working 24/7 in the warehouse. Going back to work and feeling that I am helping my people helps relieve the stress.”

While taking a short break from her family and her work, Doa’a reflected on her situation, saying, “I always wondered how other people like the Palestinians or Syrians live in war situations. Now I am living it myself and can feel their fears and suffering more. We cannot stop the war on our own but I hope to be able at least to provide humanitarian support to those people in need.”

Crowded in a small apartment with 22 people, she described the conditions made more difficult due to the lack of electricity and the intense summer heat, with temperatures that reach 108 degrees. Despite her own struggle to survive, Doa’a keeps working to help others. She helps deliver hygiene kits to new internally displaced persons (IDPs) in the area and distributes food vouchers to every family in the neighborhood.

Following such days, she wrote that before going to sleep she cried. “I feel sad and angry for my country,” she wrote. “We used to live in harmony, regardless of religious affiliation. Now, we are frightened about the future. What do I wish for? I wish for the day I can tell you: ‘We are back home and the war is over’.”

Finally, at the beginning of August large scale fighting subsided in Aden and after three months of living as an IDP, Doa’a and her family were able to return home to her old neighborhood and her apartment. At the same time Doa’a and other members of the International Medical Corps team in Aden returned to their office, located in an area that witnessed some of the city’s heaviest fighting. Doa’a and other members of International Medical Corps’ Aden team are now busy conducting assessments of the most urgent needs. The task is a large one because they are helping support 38 medical centers, four mobile clinics and two hospitals in Aden and Lahij alone. In her most recent entry, Doa writes, “The sad reality is that bombing has ceased but the humanitarian crisis is unprecedented. We are especially worried about child malnutrition which has been on the rise since the war started.”

To continue to follow Doa’a’s story, visit her blog at:

Honor humanitarians like Doa’a on World Humanitarian Day, August 19, 2015. Follow #HealthWorkersCount and  visit internationalmedicalcorps.org/whd and do your part to #ShareHumanity.

International Medical Corps has maintained a permanent presence in Yemen since 2012, with three offices and more than 175 local staff in the country. Our humanitarian assistance programs currently include: rapid emergency response, health systems strengthening and service provision, maternal and child health, protection, community development and water, sanitation and hygiene.

Since its inception 30 years ago, International Medical Corps' mission has been consistent: relieve the suffering of those impacted by war, natural disaster and disease, by delivering vital health care services that focus on training. This approach of helping people help themselves is critical to returning devastated populations to self-reliance. Visit us on Facebook and follow us on Twitter.