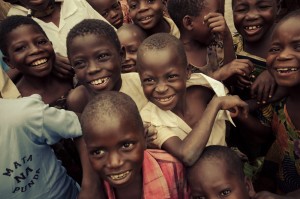 I grew up in a village in northwestern Democratic Republic of the Congo (DRC), and although I’m now a doctor and live in Kinshasa, I remember those days well.

I know what it’s like to live 23 kilometers from the nearest health center and to navigate forests and floods to get there. I know how a lack of something simple like antibiotics can cause a quick death. I’ve lost many peers from the village over the years and a lot of family members.

In fact, that’s why I became a physician.

In 2010 the DRC’s Ministry of Health developed the National Health Development Plan 2011-15, and in 2013, set a target and framework to save the lives of 430,000 children under age 5 and 7,900 women by 2015. The framework involved six approaches: universal coverage (delivery kits, community-based care called integrated community case management); continuity of care including referral facilities, improved governance and management of health areas, strengthening of human resources, communication for development, and community involvement.

The Integrated Health Project (IHP), a 5-year cooperative agreement (2010-15) between the US government and the DRC government, became an instrumental part of meeting this goal. As a USAID-funded consortium led by Management Sciences for Health (MSH), with the International Rescue Committee and Overseas Strategic Consulting, IHP was responsible for 78 far-flung health zones in four provinces and supported the health of about 20% of the DRC population. Its one-year extension, IHPplus (2015-2016) is now working in 83 zones. I have had the privilege of working as a child health specialist for IHP and IHPplus.

Since many villages in the DRC are nearly inaccessible, to aim for universal coverage, IHP developed nearly 600 integrated community case management sites throughout 39 health zones.

We found that every community has people—usually women—who have compassion for the sick and will volunteer to be a community health worker. IHP trains, supervises, and monitors them, and provides basic equipment and supplies, like acute respiratory infection timers, child-weighing scales, and rapid malaria tests. The community health workers keep antibiotics, anti-malarial drugs, zinc, and oral rehydration salts. IHP also gives them bicycles so they can ride to the nearest health center to pick up medicines—and pedal the very ill to a health center.

The actual “site” is humble—a cabinet in the volunteer’s house. But now a mother can rush her feverish child to this volunteer’s house for a malaria test instead of waiting for days hoping she’ll get better and then setting out on a long, risky journey. We encourage doctors from health centers to come out to visit the sites—it gives them more credibility in the community.

The introduction of a pre-referral artesunate suppository for children with severe malaria has tremendous potential, too. Sometimes a parent has to carry a very sick child on her back for hours -- and sometimes the child doesn’t survive.  But an artesunate suppository can work long enough for them to arrive at the hospital for treatment. We are still studying it, but where it has been introduced, it seems to work well.

The results on overall child health are also inspiring. Computer models tell us IHP has contributed to saving 108,000 lives of children under 5—about 25% of the health ministry’s countrywide target. The integrated, community-based approach accounts for many of those, and that gives me great joy.  It has also saved families untold worry, since people no longer have to choose between making a difficult journey or risking death from something treatable—the choice we had back in the village when I was young.

My country has come a long way providing for the health of her people since I was a child. I’m honored to be a part of it through MSH and IHP/IHPplus.

Narcisse Naia Embeke is a Child Health Senior Technical Advisor for the Integrated Health Project in Democratic Republic of the Congo, Management Sciences for Health (@MSHHealthImpact).