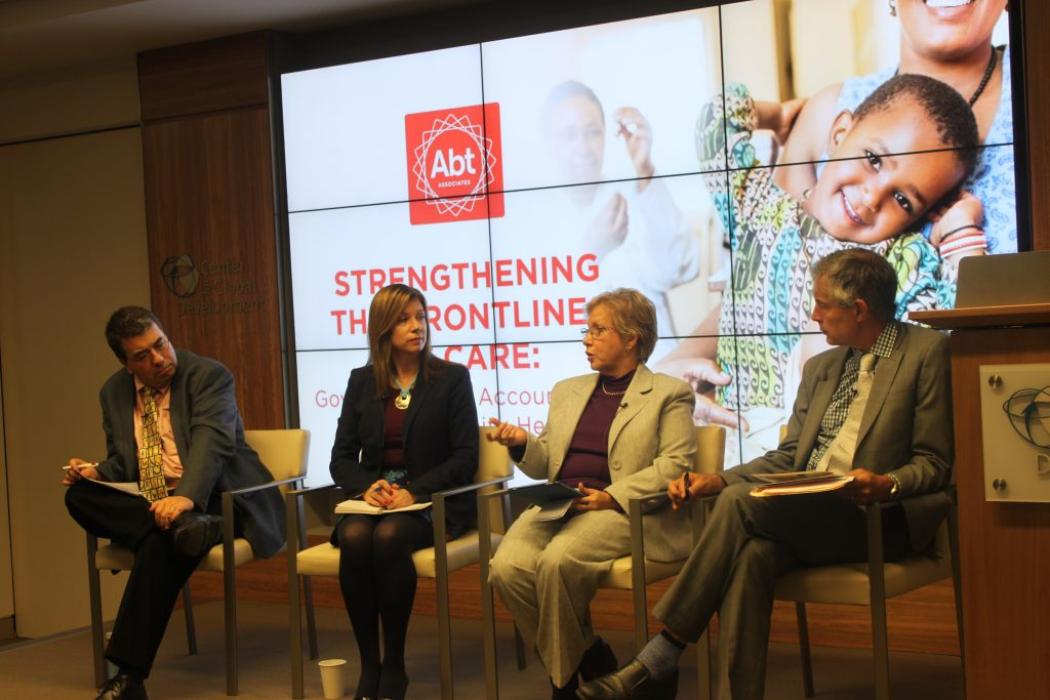 Carolyn Gomes of the Caribbean Vulnerable Communities Coalition makes a point during the Jan. 12 event on governance for community health. Listening, from left, are Eric Sarriot from Save the Children US, Lisa Tarantino from Abt Associates, and event moderator Bob Fryatt, director of the Health Finance and Governance project at Abt Associates. Photo courtesy Stephanie Anyadike, Abt Associates.

By Kate Greene and Mary Houghton, Abt Associates

Through its global and U.S. advocacy efforts, the Frontline Health Workers Coalition has called for greater, more strategic investment in human resources for health, especially at the community level. At the same time, there is growing recognition of the importance of governance in achieving universal health coverage. But the issues have not often been linked.

To kick-start a dialogue about the importance of governance in building responsive community health systems, including the health workforce, Abt Associates hosted an event in late January to learn about relevant initiatives by UNICEF, USAID, the World Bank, the Caribbean Vulnerable Communities Coalition and Save the Children US.

1) Governance interventions should empower local health workers to use their problem-solving skills and innovate but they should also provide for centralized authority to develop and enforce guidelines for safe and effective treatment. In strengthening the community health workforce, we face a tension between health worker autonomy and the need for centralized authority to safeguard public health. Tim Evans, senior director of the World Bank’s Health, Nutrition and Population Global Practice, contrasted two examples of health workers’ impact in the community. In Bangladesh, community health workers (CHWs) took it upon themselves to use mobile phones to follow up with mothers about vaccination campaigns, significantly increasing the vaccination rate. In the same country, however, Evans learned of a pharmacist who helped deliver babies in women’s homes by administering oxytocin in the first stage of labor, a practice that can endanger the life of the mother and the child. So yes, Evans concluded, local empowerment is essential, but it must be balanced with strong governance and stewardship.

2) We need to make CHWs, and the communities that support them, a visible part of the health system at large. Noting that the WHO health systems building blocks fail to recognize community health systems, Eric Sarriot, senior health systems strengthening advisor at Save the Children US, presented a new paradigm: the “Beyond the Building Blocks” model. Alongside WHO’s traditional blocks, the model includes blocks for societal partnerships, community organizations, trained CHWs, and community-based health promotion and services. By giving visibility to these elements, the model encourages policy makers to consider the important role of community-level systems when designing interventions. In a similar vein, David Hipgrave, senior health advisor and team leader for health systems strengthening at UNICEF, turned the traditional health systems model inside-out, envisioning one that places DHWs, community groups, and caregivers of boys and girls at the center, with broader networks and an integrated service delivery system supporting them, rather than vice-versa. This approach, centered on community systems, holds the potential to narrow health equity gaps, Hipgrave said.

3) Because domestic resource mobilization doesn’t always result in equitable resource distribution, we need governance mechanisms to support the community-based organizations and health workers that serve key populations. Joe Tayag, senior private sector financing advisor at USAID, observed that while some countries now domestically finance the majority of their HIV programming, they fund only a small share of programming for key populations such as men who have sex with men, transgender people, and prisoners. Stigma and a related lack of political will are an obvious barrier, but a lack of governance mechanisms can also be a problem. An enabling policy environment, allowing for such things as direct contracting with community-based organizations (CBOs) for treatment of key populations, could make a difference, Tayag suggested. He noted that in Thailand, funds mobilized to support CBOs through hospital contracting didn’t move due to a lack of standard operating procedures for this mechanism. PEPFAR is now providing technical assistance to design and implement a reimbursement package and contracting mechanisms so that domestic financing can flow down to community-based organizations. These sorts of policy approaches have seen success in Jamaica, said Carolyn Gomes, executive director of the Caribbean Vulnerable Communities Coalition (CVCC).  Gomes described how Jamaica AIDS Service for Life, which started as a group of families and friends running a hospice, now has a formal partnership with the Jamaican government to provide HIV services and treatment to key populations. CVCC is now supporting similar initiatives by other community-based organizations in the region.

4) Because the community health workforce includes many players -- including for-profit providers, lay health workers, and faith-based groups, to name a few – similarly diverse policy interventions are needed to unlock the full potential of the workforce. Tailored policy interventions, as opposed to one-size-fits-all approaches, will help promote better care and faster growth of the global health workforce. One promising example is to make private-sector providers eligible for government loans, training, and reimbursements, said Lisa Tarantino, a principal associate at Abt Associates. USAID’s Joe Tayag and CVCC’s Carolyn Gomes also highlighted the success of task shifting interventions, such as allowing trained peers and volunteer health workers with close ties to key populations to conduct HIV testing and counseling. Another idea that has worked: allowing private outlets to sell pre-exposure prophylaxis HIV-prevention medication.

5) Improving the performance of health workers and health systems requires community engagement. Research has found that non-state actor engagement is a key success factor in providing quality health services, according to Abt’s Lisa Tarantino. One mechanism for institutionalizing community engagement – and ensuring responsiveness to community needs – is to require community representation in local health governance committees. USAID’s HFG Ethiopia project supported the piloting and national scale-up of local health-facility boards through broader health financing reform. The boards allow facilities to keep service fees that would normally go to the government. The facilities then decide for themselves how to invest the funds to improve quality. Investments have included improving infection control in waiting areas and upgrading maternity wards, measures that in turn support a better working environment and improved health worker performance. Excited by all these ideas? Keep an eye on HSR 2018 this October in Liverpool with its sub-theme on community health systems, plus other upcoming fora, for more discussion about how we can accelerate gains in building the frontline health workforce at the community level!