Cost of Scaling up the Health Workforce in Liberia, Sierra Leone, and Guinea Amid the Ebola Epidemic: FHWC Costing Analysis (March 2015) 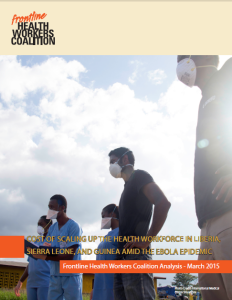 March 2015 The Frontline Health Workers Coalition recommends that the U.S. Government and its partners address the public health emergency resulting for the Ebola virus epidemic in Liberia, Sierra Leone, and Guinea by investing in the training, retention, and support of frontline health workers. Based on the assumptions, data and calculations in this paper, the overall cost of doubling the health workforce over five years in Liberia, Sierra Leone, and Guinea, and expanded coverage via a community health worker program comes to approximately $573.4 million, or less than $115 million per year on average. It should be noted that the estimates for this costing analysis were not asked for and are not those of the governments of Liberia, Sierra Leone, or Guinea – and any investments made to increase the capacity of the local frontline health workforce in these three countries should be made in close partnership and coordination with the governments of each country. A strong commitment by the United States and other donors could help assist the three countries most heavily affected by the Ebola crisis to not only build resilient workforces and systems capable of ending the Ebola epidemic but also to restore essential health services and build capacity to respond to future health threats. Read the full costing analysis here.  Read our Ebola policy recommendations here.  Find these resources and more from our members at frontlinehealthworkers.org/ebola/.

Curiosity and passion drove me to become a physician. Then I realized I needed to learn how to be an advocate too.

What Will It Take to Get Nurses the Respect and Recognition They Deserve?

Tracy Kobukindo knows how to bring more nurses to the table.

This Is a Big Moment for Health Workforce Advocacy and Policy Change.

Here are some of the wins and opportunities the Frontline Health Workers Coalition is tracking.